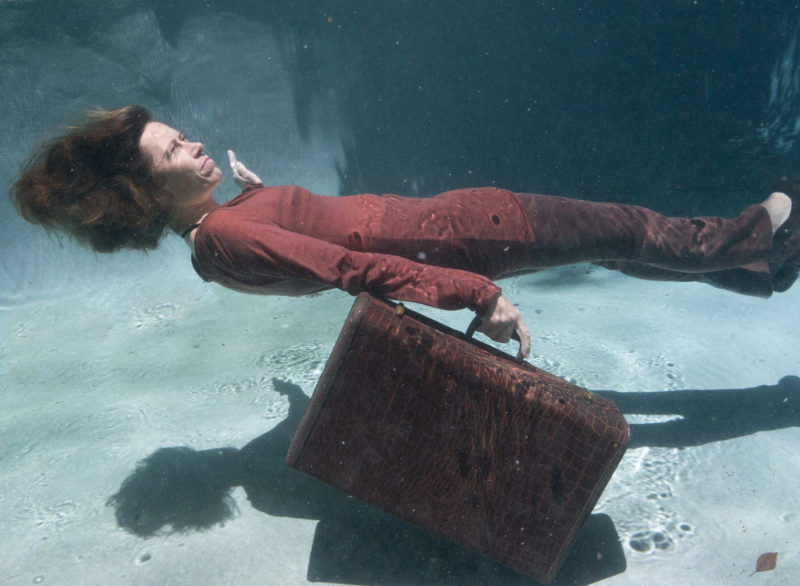 A native New Orleanian, Michel Varisco has dedicated her decades-long career to exploring the endangered environs of Southeast Louisiana and the Gulf coast, including the tenuous relationships between organic and engineered environments. Through a deep immersion in our wetlands, swamps, rivers, and cultures, Varisco’s large-scale projects in photography, assemblage, installation, sculpture and video tell universal stories of loss and regeneration. Spellbound by the uncanny truth that the water surrounding us mutually sustains and destroys, Varisco’s current project, “Below Sea Level”, aims to unpack the intimate, subterranean experiences of life as an endangered community.

A collection of staged, magical realist photographs in which Varisco imagines Louisiana as a modern-day Atlantis with residents adapting to life underwater, “Below Sea Level”, is an artistic investigation of place, subject, and the emotionally rich narrative of befriending our predicted fate. Unconventionally shot while submerged underwater, “Below Sea Level” also functions as a performative collaboration. Coaching a diverse group of residents to be;  versus, perform produces images that reflect the gravitas of our lived reality. The surrealism of being underwater imbues the images with a poetic beauty Varisco identifies as a particularly spiritual relationship with impermanence. How do we survive in this nature, how do we stay grounded on a land that’s vanishing? “Below Sea Level” imagines a poetic, metaphorical response to these urgent questions – we create a new world below the surface of the water. Varisco’s solo exhibition of “Below Sea Level” archival pigment prints and assemblages will open at A Gallery For Fine Photography as part of PhotoNola 2017.

Varisco’s large-scale projects “Fragile Lands”, “Shifting” and “Fluid States” have garnered many prestigious awards and commissions from organizations including SURDNA Foundation, Louisiana Endowment for the Humanities, Joan Mitchell Foundation, and the Rauschenberg Foundation. “Turning: prayer wheels for the Mississippi River”, Varisco’s sculptural installation commissioned by the City of New Orleans and Arts Council of New Orleans, unveils this fall in the New Orleans biennial Prospect.4. Varisco also works as an artist-mentor at the New Orleans Center for the Creative arts, where she has taught for twenty-one years.