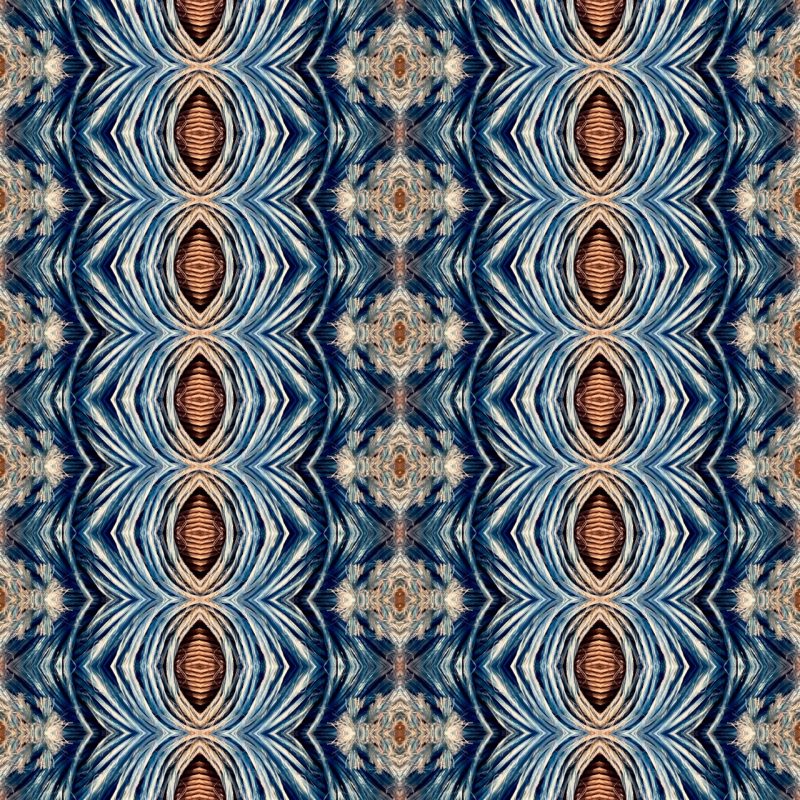 “The Trees Beneath”: A digital and sculptural collaboration by Matt Vis and Jack Niven
The title The Trees Beneath describes the underpinnings of two bodies of work. In one it is used as a metaphor to describe the interior structure of things: digital manipulations that turn systems of building inside out in order to delve into a fractal-like investigation of their unique thrum and vibrations. Images that seek to find rhythm and order among dissonant chords encountered in architecture of all sorts (bridges, houses, interiors, overpasses …) and relate these viscerally to the movement, or blockages, of energies within the human body.

In another body of work, we see fragments of the actual elements used in construction. Pieces of wood that may have been part of, and broken away from, boats, docks, houses fencing, habitation, and infrastructure. These chunks of formerly intact fabrications have now become solid artifacts on their own, cast in concrete and corralled as elements of a new framework. Their arrangement in mandalic fashion is used to create a unified object for contemplation.

Matt Vis:
These digital photo manipulations began in a hospital bed as simple objective observations of my immediate environment. They were odd little arrangements that caught my eye. I felt as if I was capturing one “Still Life” after another as I myself led a very “still” life. These visual documents grew into a few different themed collections titled “Situational Anomalies”, “Double Takes”, and “Perfectly in Place”. I shared that feeling of stillness with these objects as we cohabited, and my curiosity soon turned from physical observations into a reflexive phenomenology where a more complex engagement could develop.

“When the body is still the mind is free to wander.”

I then began to cut, flip, and repeat sections of those photos for their eventual arrangement into patterns that had a curious and pleasing effect: it satisfied my inexplicable need to create; but more importantly, it brought a sense of “mental order” to my pain-addled stasis. During the process of constructing what I came to call “theoretical architecture”, and throughout my continued study of the completed arrangements, I found myself in something of a meditative state which displaced the constant and sometimes overwhelming pain that I felt throughout my recovery from back surgery. The name and purpose of my efforts were gradually revealed during this organic process: “Meditation Patterns for Pain Reduction”.

Jack Niven:
I’ve lived in close proximity to the Mississippi River since residing in New Orleans. It is a waterway with a dynamic history tied to the fabric of a nation relative to its exploration, development and economy. We often walk the riverbanks near our home on the Westbank and pick up items found at the water’s edge. Pondering the origins of these pieces of flotsam and jetsam I imagine that they may have once been components of peoples’ lives and livelihoods. Are they from just around the nearest bend upriver or from as far north as the border with Canada where this stream first begins to meander? Did these shards of post and beam naturally deconstruct with age and join a flow of waterlogged debris southward through America’s largest vein or fall victim to the trauma of human waste, or natural disaster? Casting fragmemts that were once adrift, into concrete objects that will float again in a new formation gives them further use to serve as a focus for reflection. Collectively, and individually, they are called “Markers”.