PhotoNOLA is proud to present Tell my feet I made It Home, by Gus Bennett, as our 2019 Collectors Club Print.

Gus Bennett is a New Orleans-based photographer whose work is about community and collaboration. ‘Tell my feet I made it Home’ is from a series of the same name. Bennett began the project after evacuating from the city for Hurricane Katrina. Feet became a focal point for telling the story of his evacuation journey and eventual return to New Orleans. Once back home, Bennett began to document feet dancing in the streets at New Orleans’ Second Line parades and celebrations. In this context, the feet become a symbol of joyful reclamation – of the streets, of the culture, of the city itself.

Mr. Bennett, who is celebrated for his portraiture and use of natural light, refuses to look into his lens with preconceived notions. “I don’t create magic,” he said. “I’m just waiting for it to show up.”

The limited edition of 100 (plus five artist proofs) is an archival pigment print, featuring a 7×9” image on 10×12” hot press, cotton rag paper. Each print is signed and numbered by the artist. Tell my feet I made It Home is a new image by Gus Bennett and is being offered for the first time in this exclusive edition for PhotoNOLA.

ABOUT THE ARTIST
Gus Bennett has been a professional photographer for more than four decades. In that time, he has worked in the United States, the Republic of Kenya, the East African country of Dar-es Salam, Tanzania, Belgium and Mexico. His work spans the realms of fine art, fashion and entertainment photography. 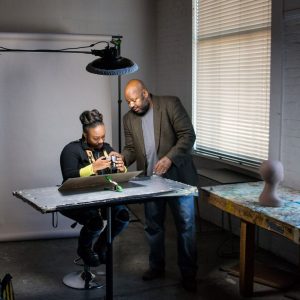 Widely known for his New Orleans People Project (NOPP), Bennett has created portraits of more than 3000 people since he began the series in 2013. Bennett’s other projects include “Speaking Walls,” a visual narrative of the individuals and communities that were affected by Hurricane Katrina; “Saints and Sinners,” a series about black spiritual identity; “Rooms in My Mother’s House,” a project that explores the beauty and sanctity of the black female form; and “Suspicious Black Men,” which explores the ramifications of men who are illegally profiled and/or detained and later found to be completely innocent.

In 2016, Gus Bennett was recognized by the Urban League of Greater New Orleans with an “Essence of New Orleans” award for his outstanding achievements in bridging communities through the arts. He was also presented with the “Keeper of the Flame” award by the Mardi Gras Indian Council for his documentary series of past and present Mardi Gras Indian chiefs. He was named a finalist for New Orleans Photo Alliance’s Clarence John Laughlin Award in 2018, and was selected for the Joan Mitchell Center Artist-in-Residence Program in 2019.

Gus Bennett was raised in the Upper 9th Ward, where his neighbors were his first photographic subjects. He attended Southern University at New Orleans, earning a bachelor’s degree in print journalism and a master’s in museum sciences. He credits public involvement and collaboration as the key to his success as a photographer.

Imag: Gus Bennett teaching about portrait photography in a community workshop at the CAC ©Grizzly Photography