PhotoNOLA is proud to present Las Estrellas, our inaugural Collectors Club print from Josephine Sacabo’s Nocturnes series. The limited edition of 100 prints (plus five artists proofs) was created exclusively for supporters of PhotoNOLA. The edition is an archival pigment print, featuring a 9×7” image size on 12×10” hot press, 100% cotton rag paper. Each print is signed and numbered by the artist.

We dream in images. Images are at the most basic level of our true psychic reality. Our dreams are the metaphorical pictures of our individual realities. I believe that through them we can forge a deeper connection between ourselves and the world. By uniting dream and reality we can produce an art that will resonate and in the process learn something about ourselves and others. I photograph things not as I ‘see’ them but rather as I might have ‘dreamt’ them.

The way I’ve put it together in my head is that you have the moon moving across the sky, looking in our windows and seeing our dreams. The “Nocturnes” are what she sees. – Josephine Sacabo 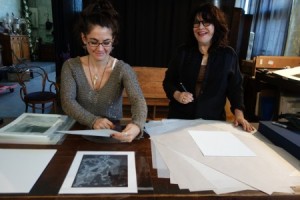 Josephine Sacabo is an internationally renowned artist, who divides her time between New Orleans and Mexico. Both places inform her work, resulting in imagery that is as dreamlike, surreal, and romantic as the places that she calls home.

Born in Laredo, Texas, in 1944, Sacabo was educated at Bard College in New York. Prior to coming to New Orleans, she lived and worked extensively in France and England. Her earlier work was in the photo-journalistic tradition and influenced by Robert Frank, Josef Koudelka, and Henri Cartier-Bresson. She now works in a very subjective, introspective style, using poetry as the genesis for her work. Her many portfolios are visual manifestations of the written word, and she lists poets as her most important influences, including Rilke, Baudelaire and Sor Juana Ines de la Cruz. Her images transfer the viewer into a world of constructed beauty.

During her 36-year career her work has been featured in over 40 gallery and museum exhibitions in the U.S., Europe and Mexico. She has been the recipient of multiple awards and is included in the permanent collections of the George Eastman House, the International Center of Photography, the Metropolitan Museum of Art and la Bibliothéque Nationale, Paris, France. She is represented by: A Gallery for Fine Photography, Catherine Edelman Gallery, Stephen Clark Gallery and Verve Gallery of Photography.